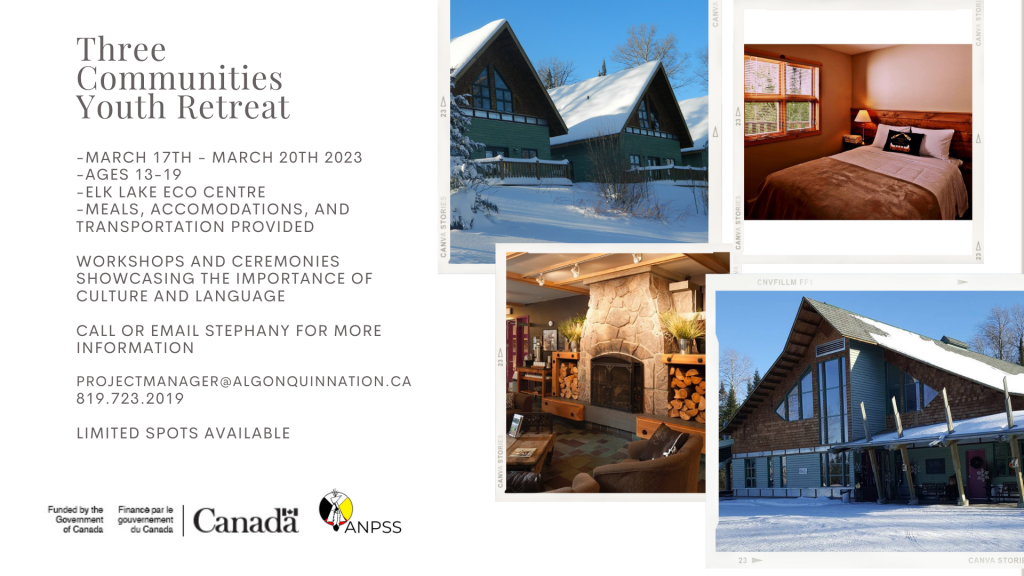 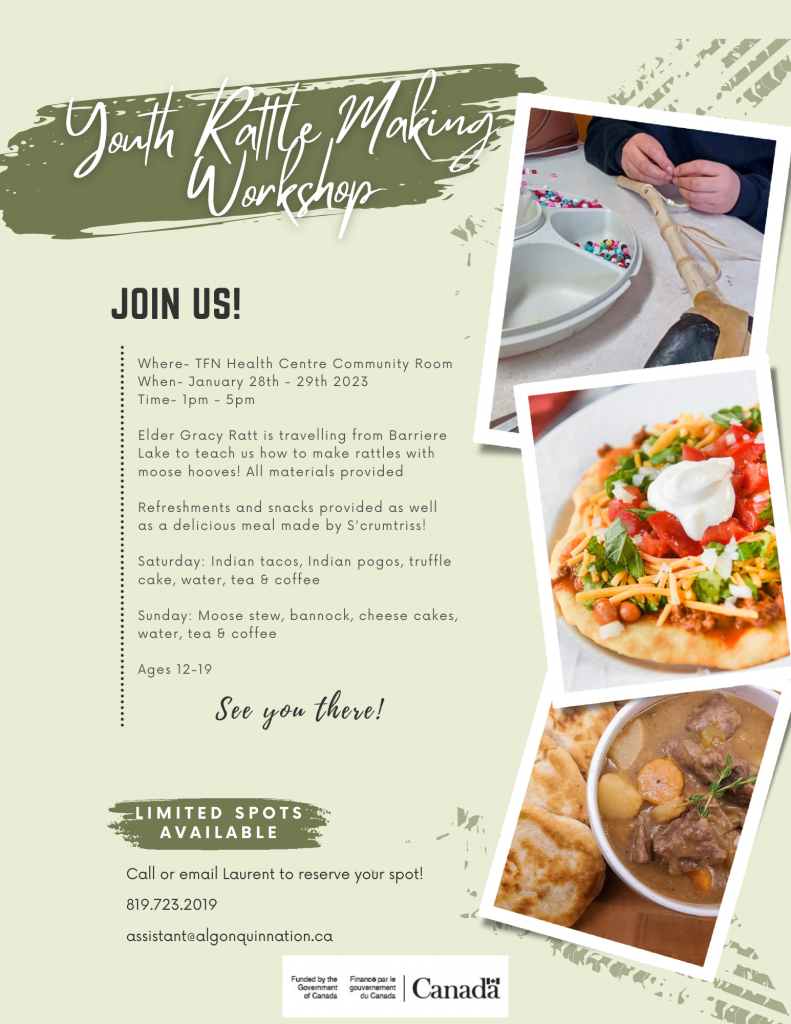 BOARD OF DIRECTORS REPORT

The Board, consisting of the Chiefs and representatives from the Algonquins of Barriere Lake, Timiskaming First Nation, and Wolf Lake First Nation met on the 18th of January, 2023 and approved the following by consensus agreement, as is the way of the Anishinaabe:

Should you want any additional information, please call the office (819-723-2019), or visit our website, which is also being updated.

The Three Communities Gathering was held September 28, 2022.  The youth looked to have had a great time.  They participated in many activities, and a summary of these included:

The youth left early in the morning to take their positions in tree stands, in a hunt lead by 3 TFN community members, Nate McMartin, Jeremy Babin and John Babin. It was Jeremy’s team that downed the moose. 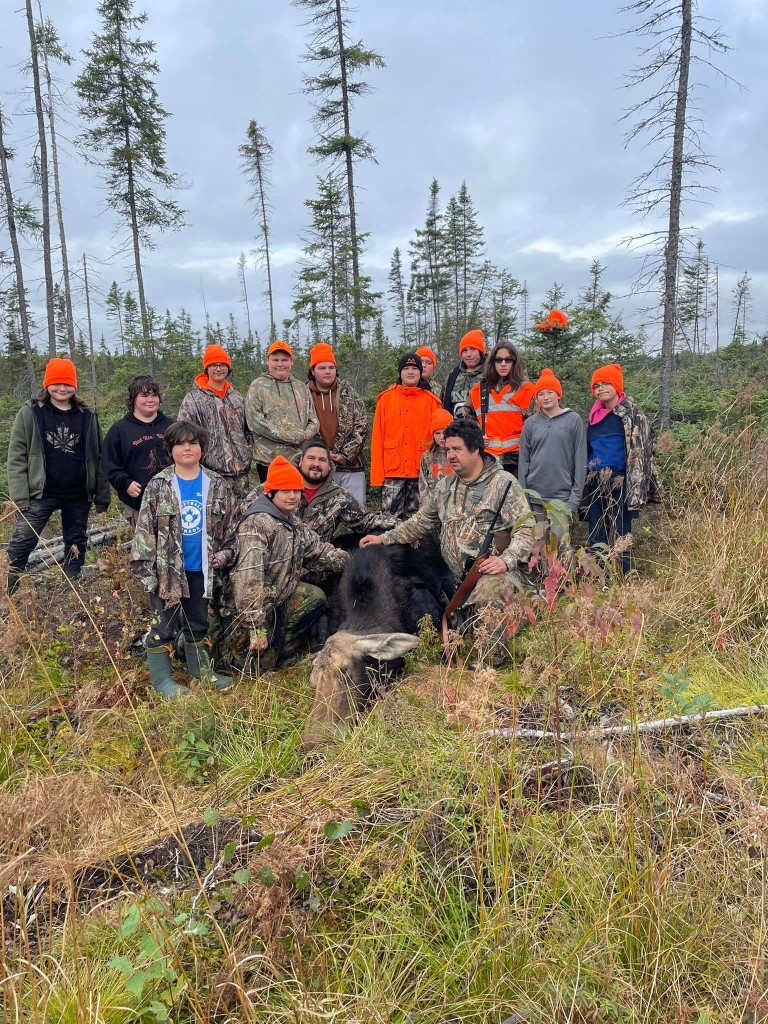 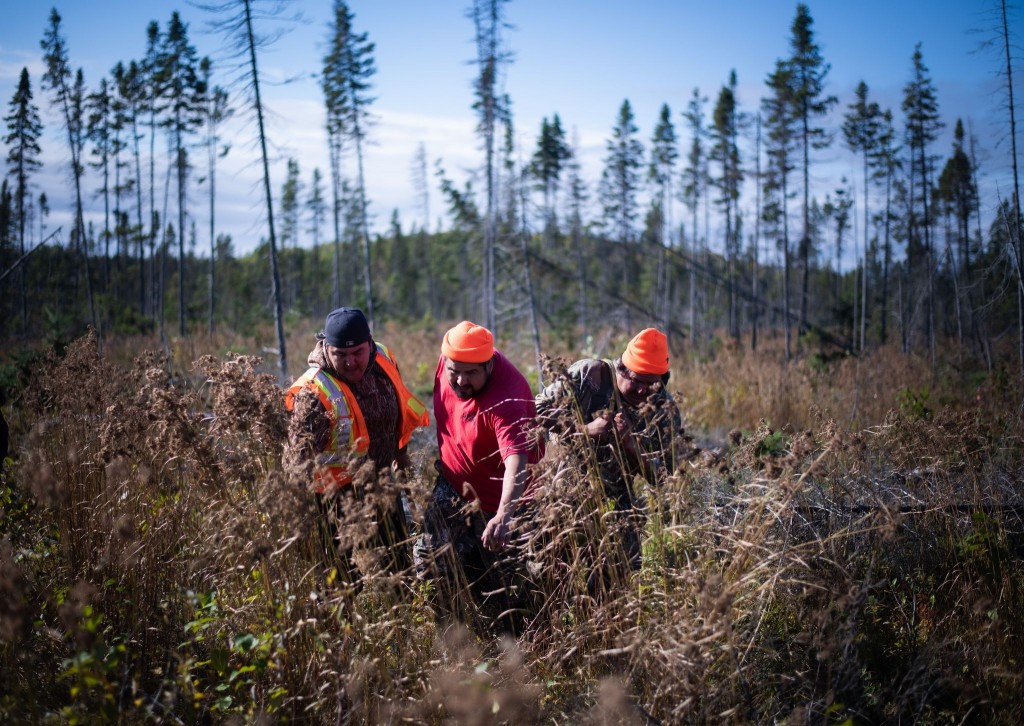 Gutting and Quartering the Moose

The youth were regrouped, Nate, Jeremy, and John showed them the steps to processing a downed moose. Tobacco was laid down to give thanks. The moose was opened, and its viscera were removed with care, to not spoil the meat. Its heart, liver and one of its kidneys were kept, and its head removed. The moose was then parted to facilitate transportation. Its viscera remained on-site to be returned to the ecosystem. 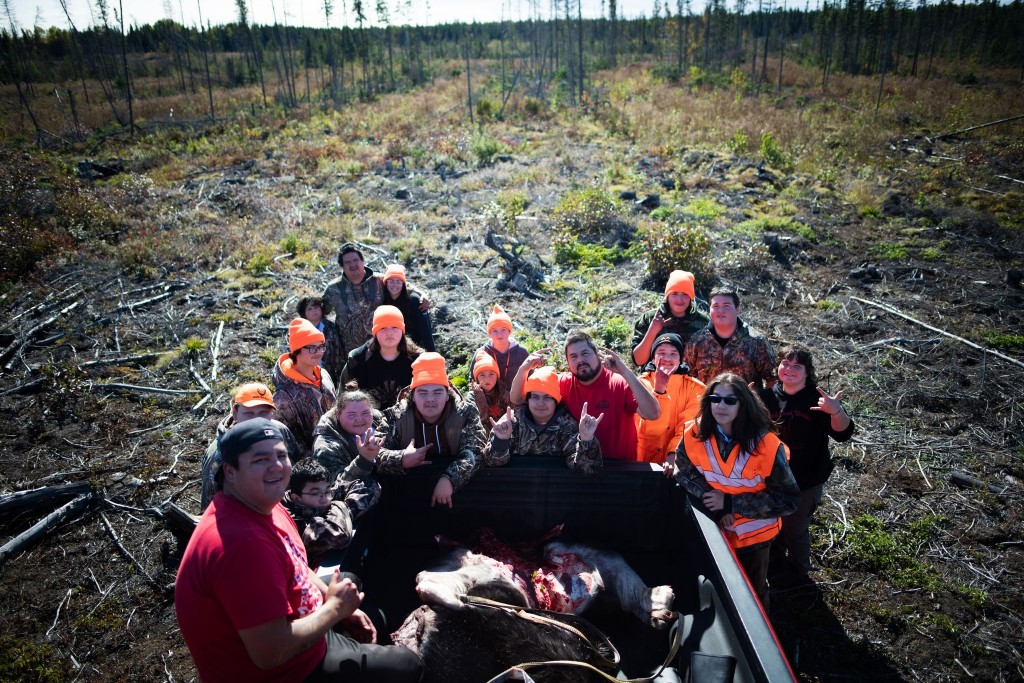 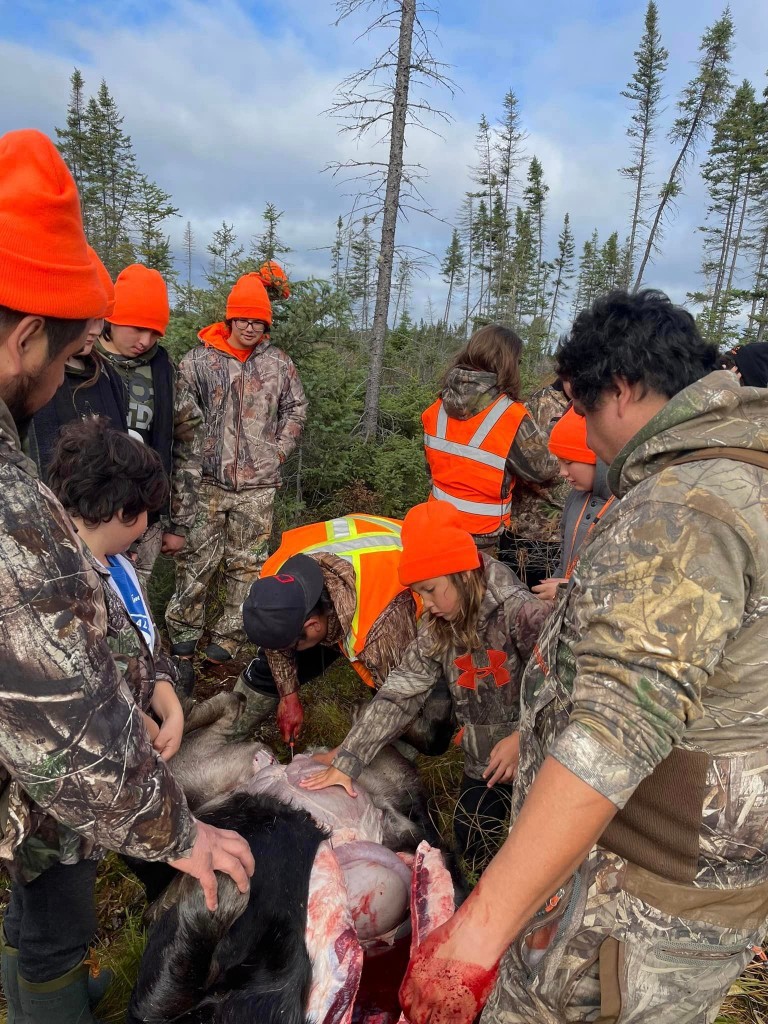 Once back at the camp, the youth assisted Rapid Lake Elder, Gracy Ratt, in the skinning of the moose head, and the subsequent carving of meat from the skull. The tongue was removed for later use. 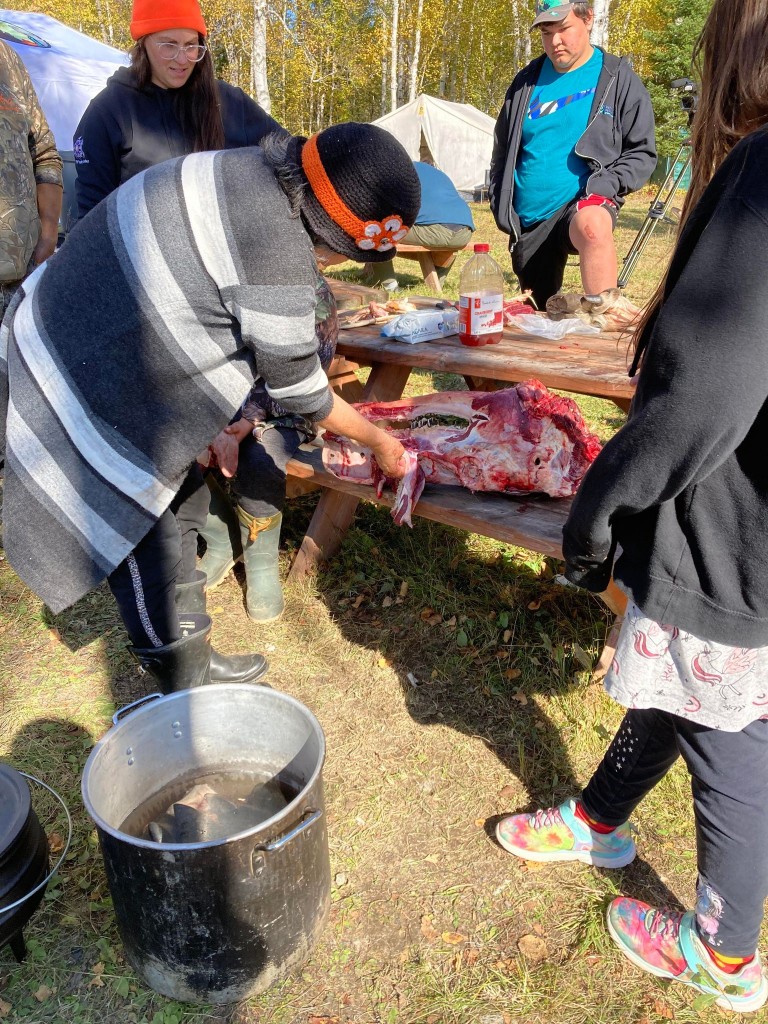 Skinning and Stretching the Legs

The youth were each given one moose leg and, following the instruction of Gracy, skinned them. The leg skins were then stretched and nailed to a board to dry. They are to be made into bags at a later date. 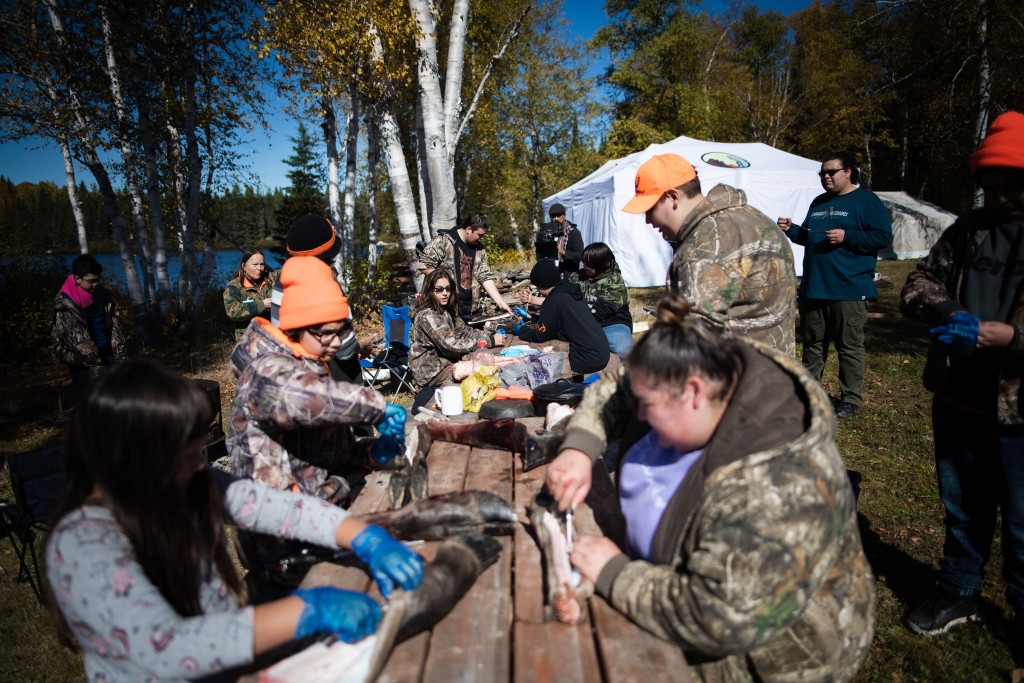 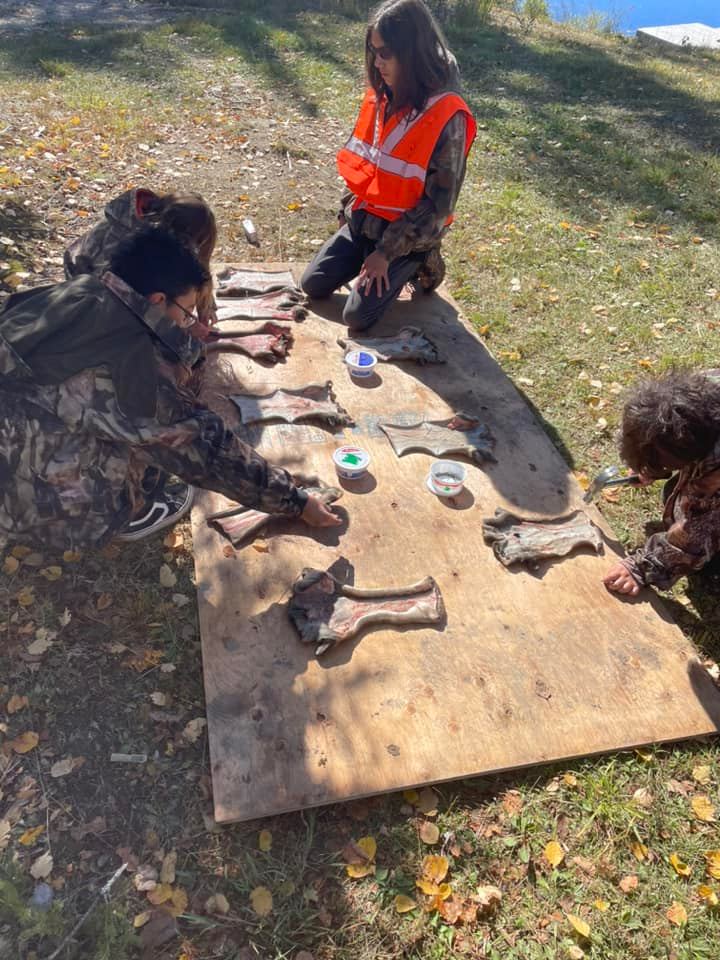 Emptying and Cleaning the Hooves

The hooves were then removed from the legs. Emptied and cleaned by the youth. They are to be made into rattles at a later date. 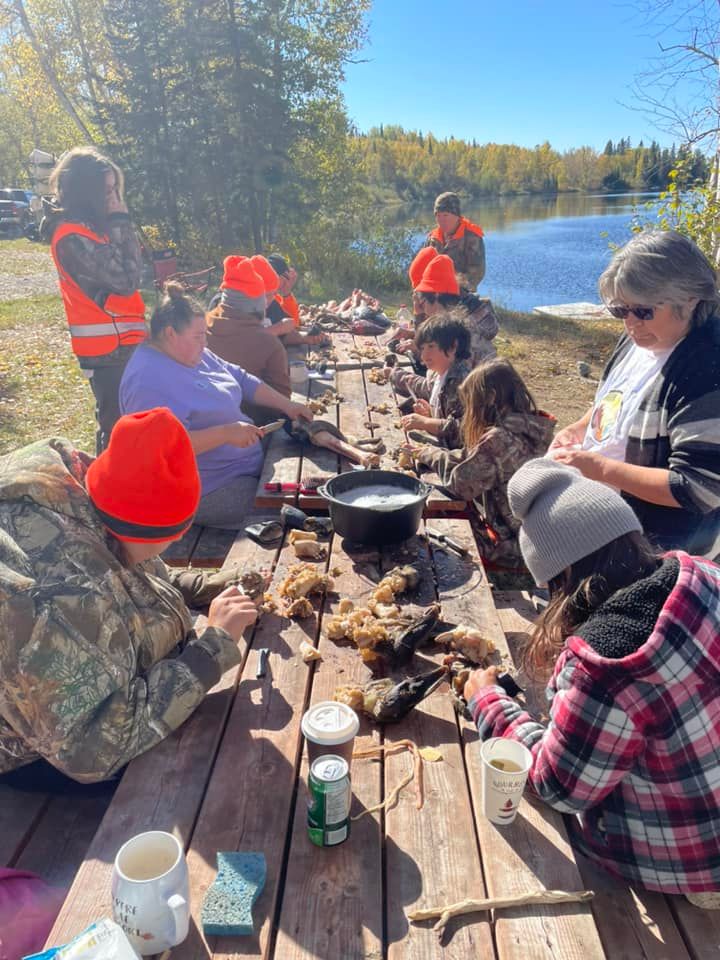 Gracy brought a moose hide in the process of being tanned and the youth assisted in scraping it. Gracy explained that, in her youth, it was her role in the family to assist in the processing of hide. 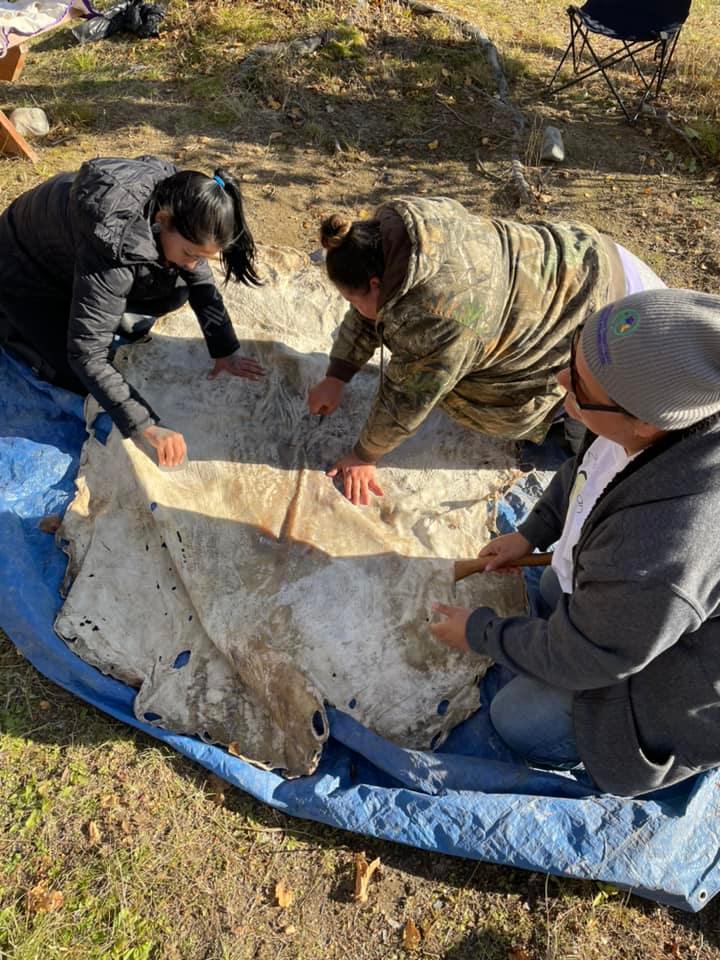 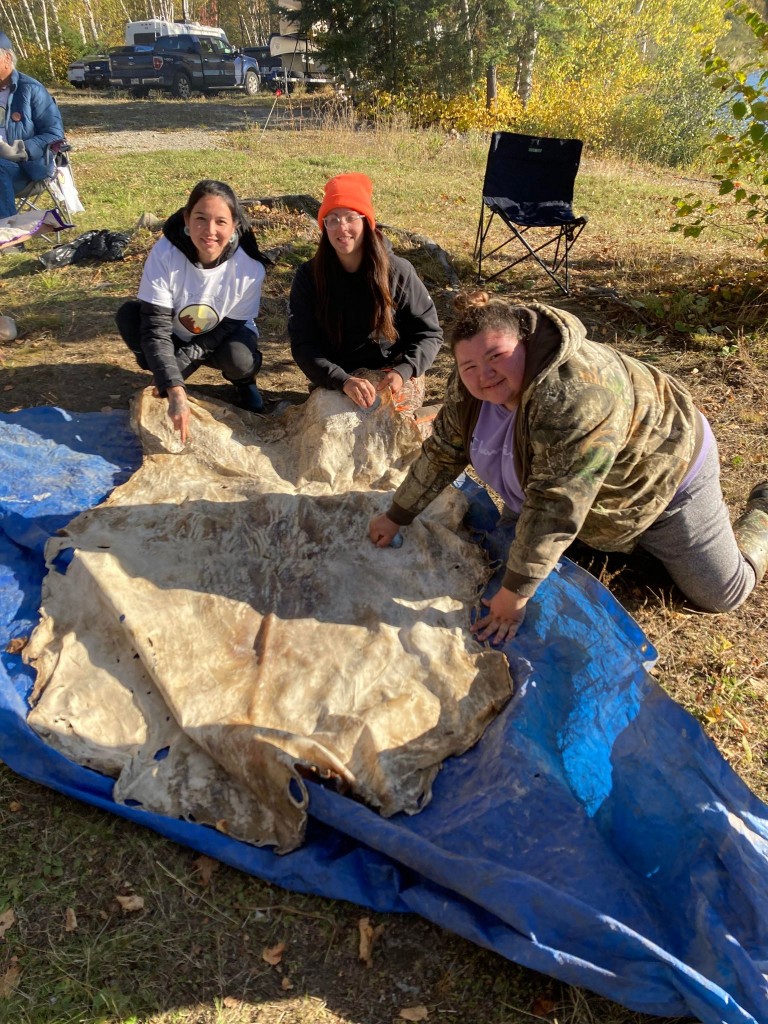 The Ni Dakinan team facilitated a tea making workshop. The youth learned to make tea from local plants such as sumac and Labrador tea. 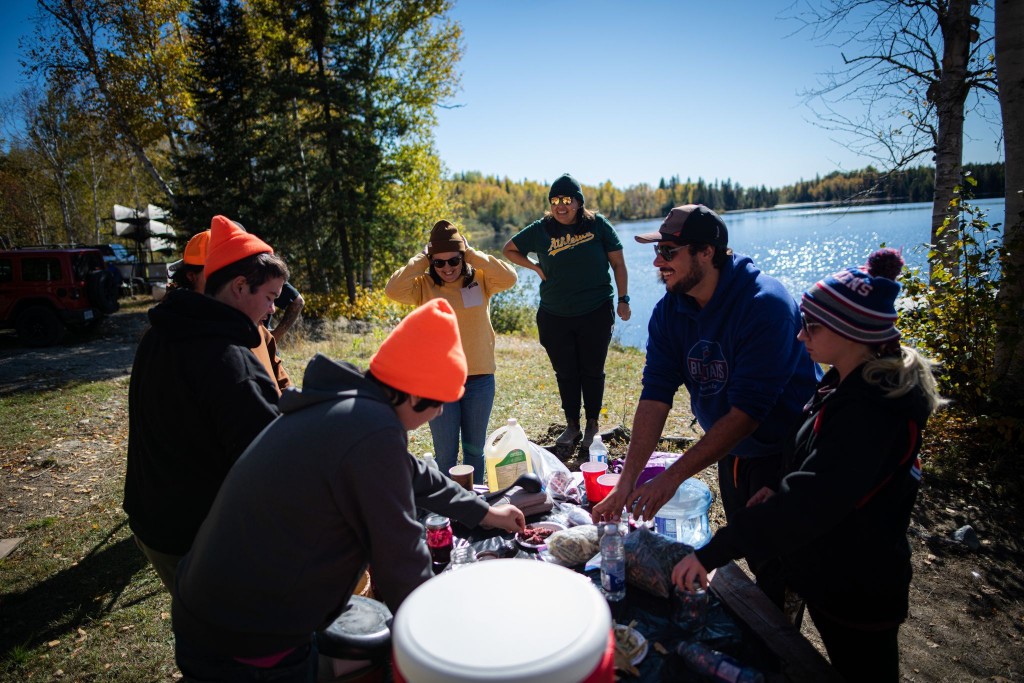 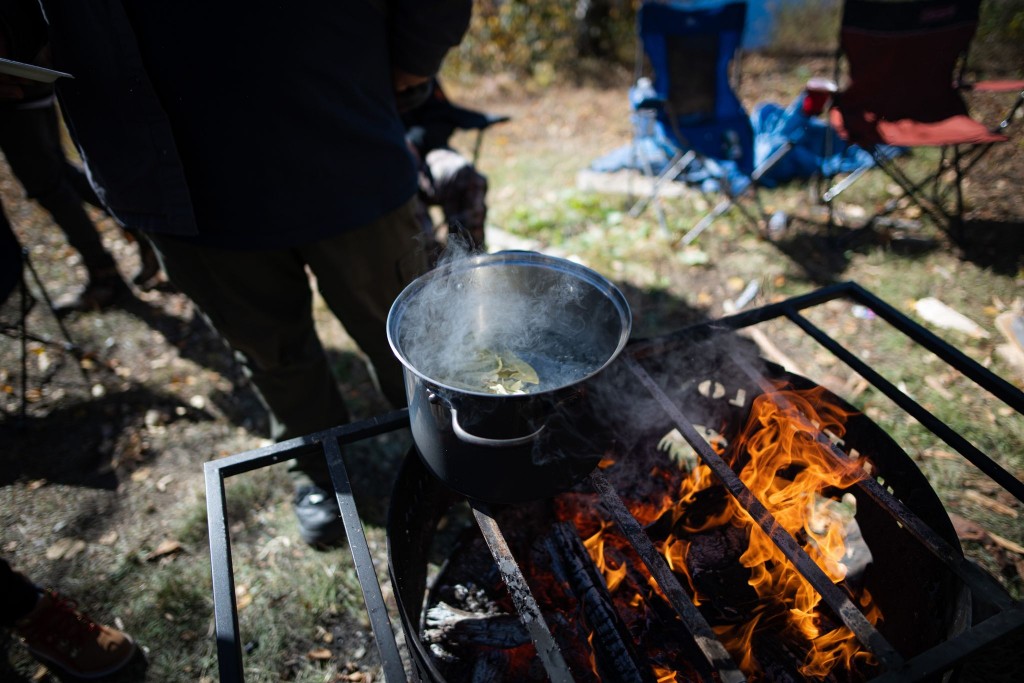 Gracy put the leg bones over the fire, opened, and emptied of their marrow. The kidney, heart, liver, and tongue were also cooked. These were all made available to be tasted, along with bannock. Though many youths were hesitant to try them, those that did generally enjoyed it. 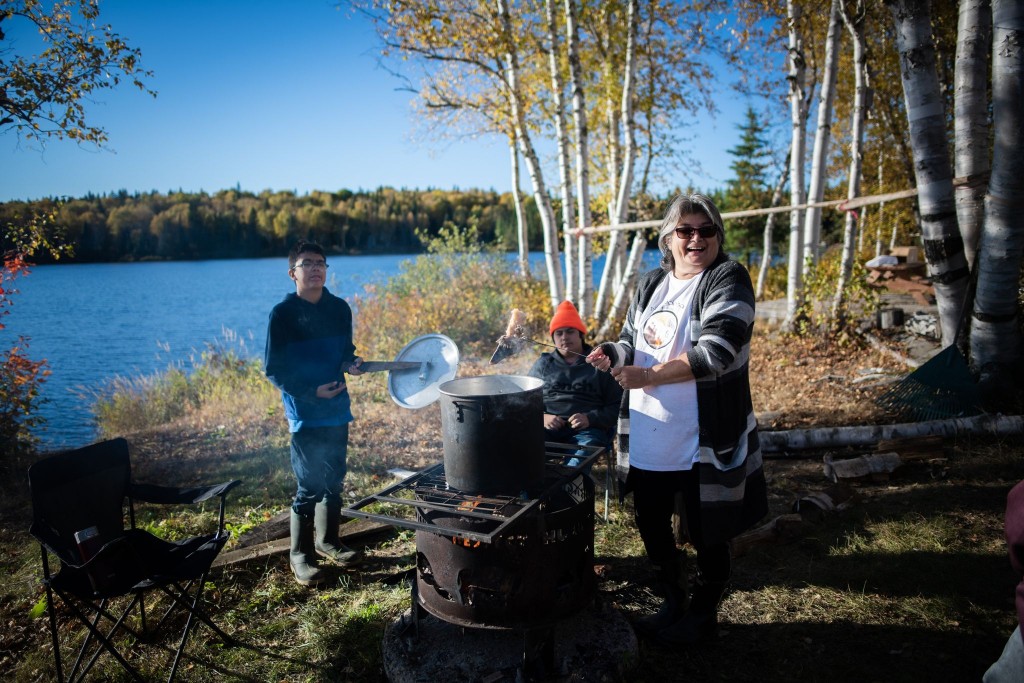 Gracy showed the youth how to clean and skin a skunk.

The youth took turns doing a moose call and the person who did the best one was awarded a small prize.

Throughout her instruction, Gracy and her husband, both fluent speakers of Anishinaabemowin, taught the youth the names of various parts of the moose, as well as that of local animals and plants. The Elders were proud to see the youth participate in all the activities and learning their traditional language. 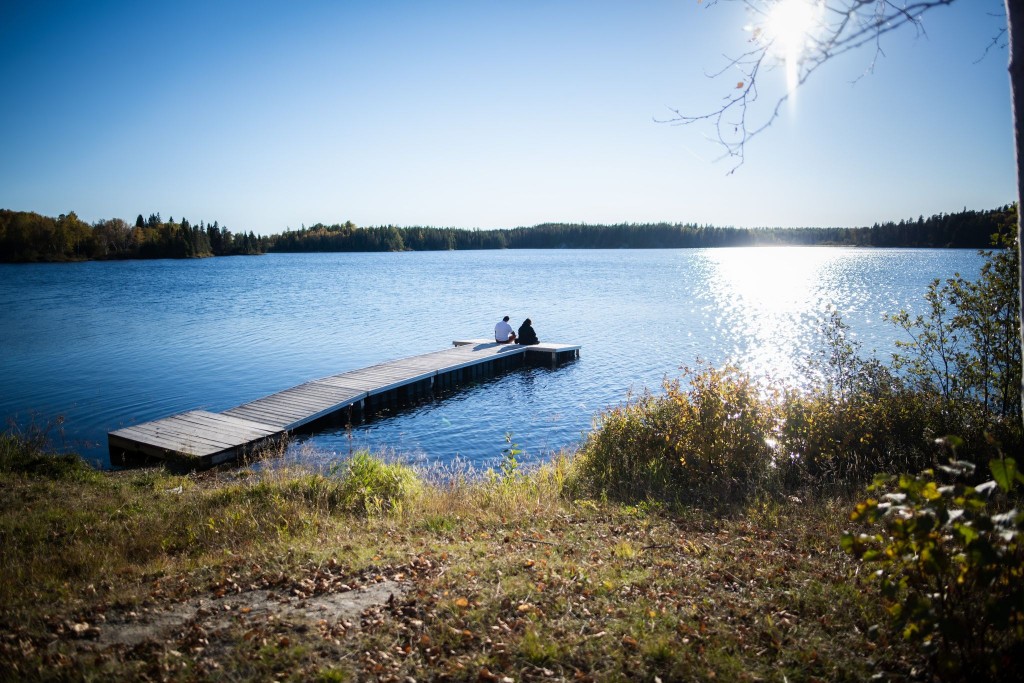 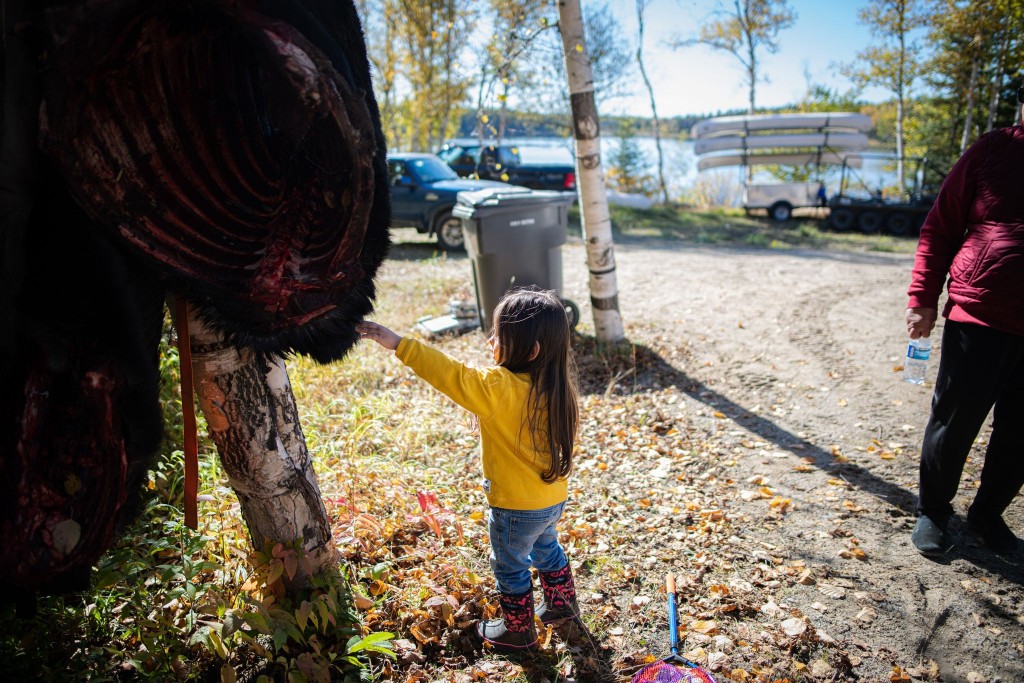 Some of the youth used their downtime in between workshops to go hunt partridge. A few of them were successful and were able to bring home partridge breast.

Many youths took advantage of the beautiful lake and went canoeing. They did so out of love for the activity, as there was no structure or obligation to it. 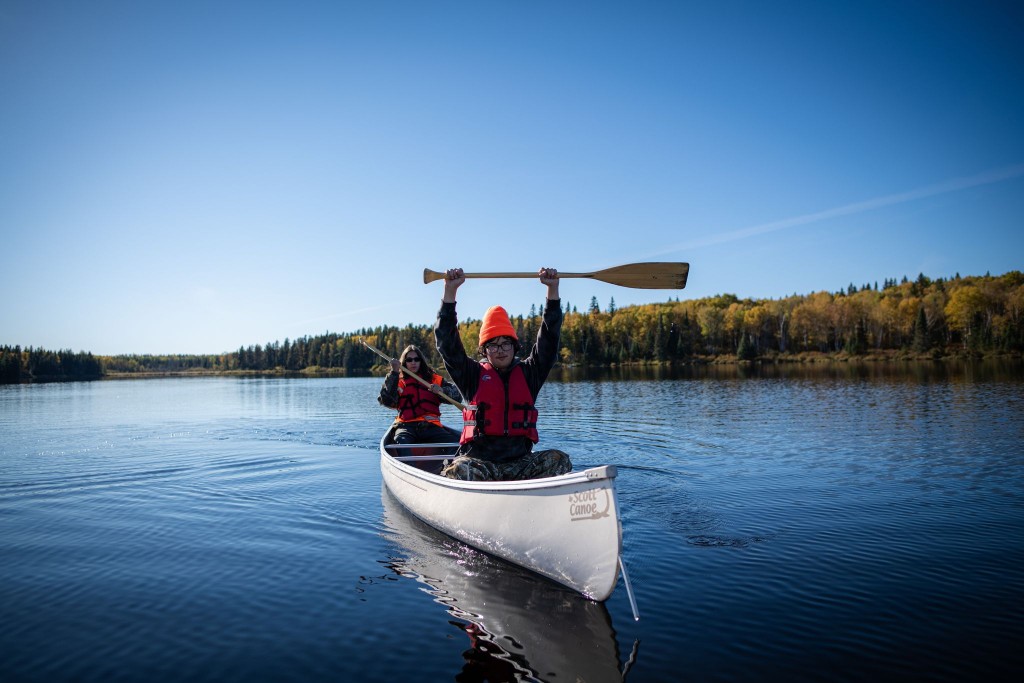 Wood splitting was a surprisingly popular pass time amongst the youth, so much so that an evening’s fire was fueled largely by kindling produced by excessive splitting. In addition, an unofficial competition of sorts was held to see who could deal the most damage to a knot-ridden log.

On the night of the 1st, Paula King set up a sound system and the youth, as well as some adults, took turns signing songs. 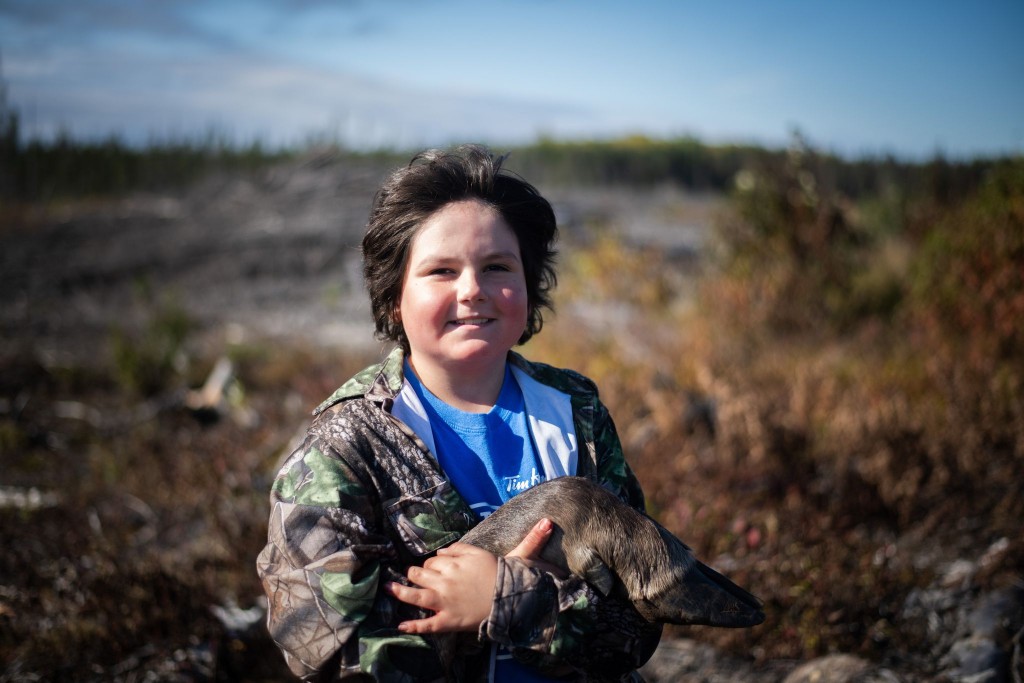 This event was part of the Indigenous Language and Culture Program and was funded by the Government of Canada through the Canadian Heritage Fund. 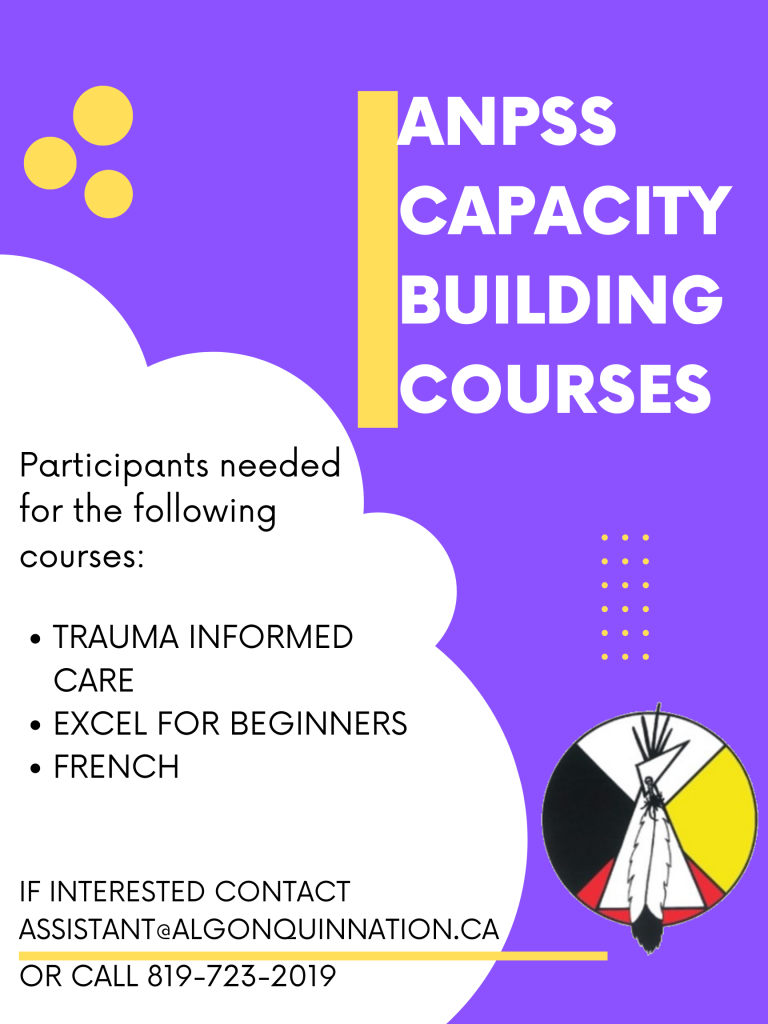 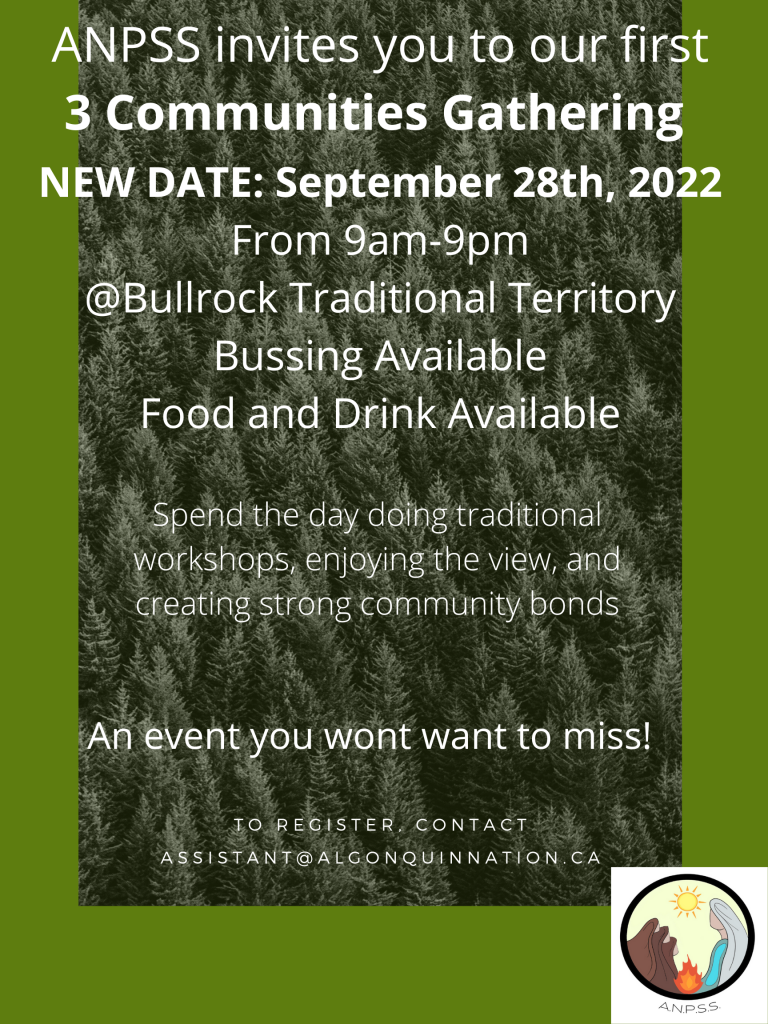 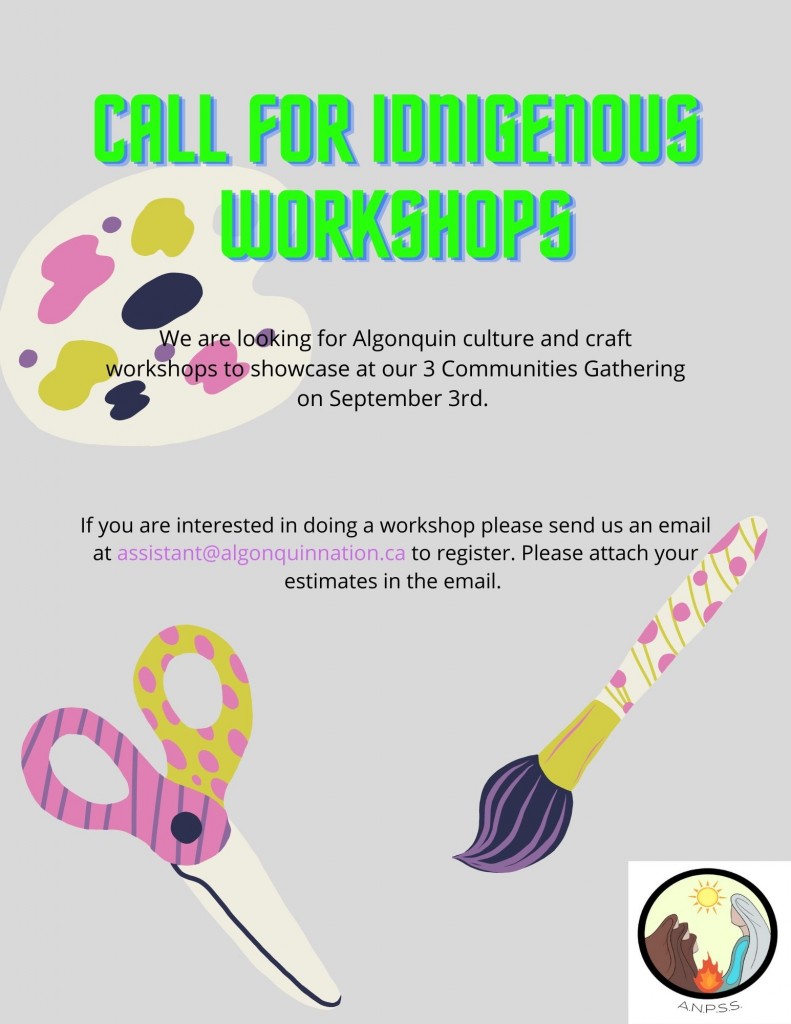 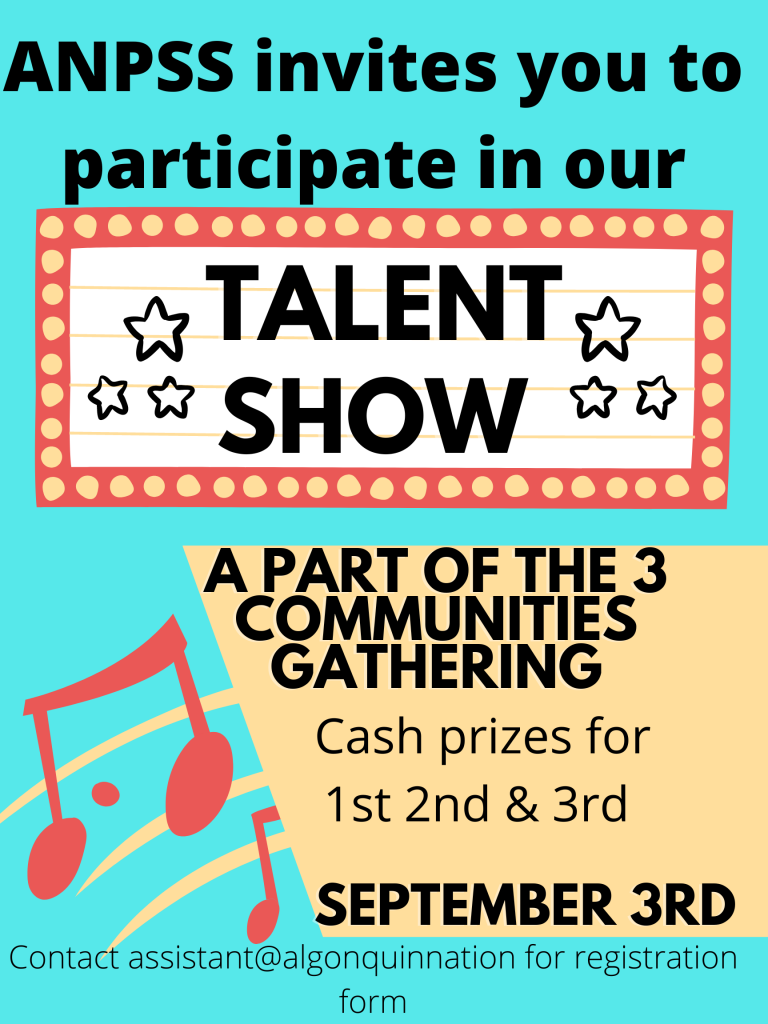 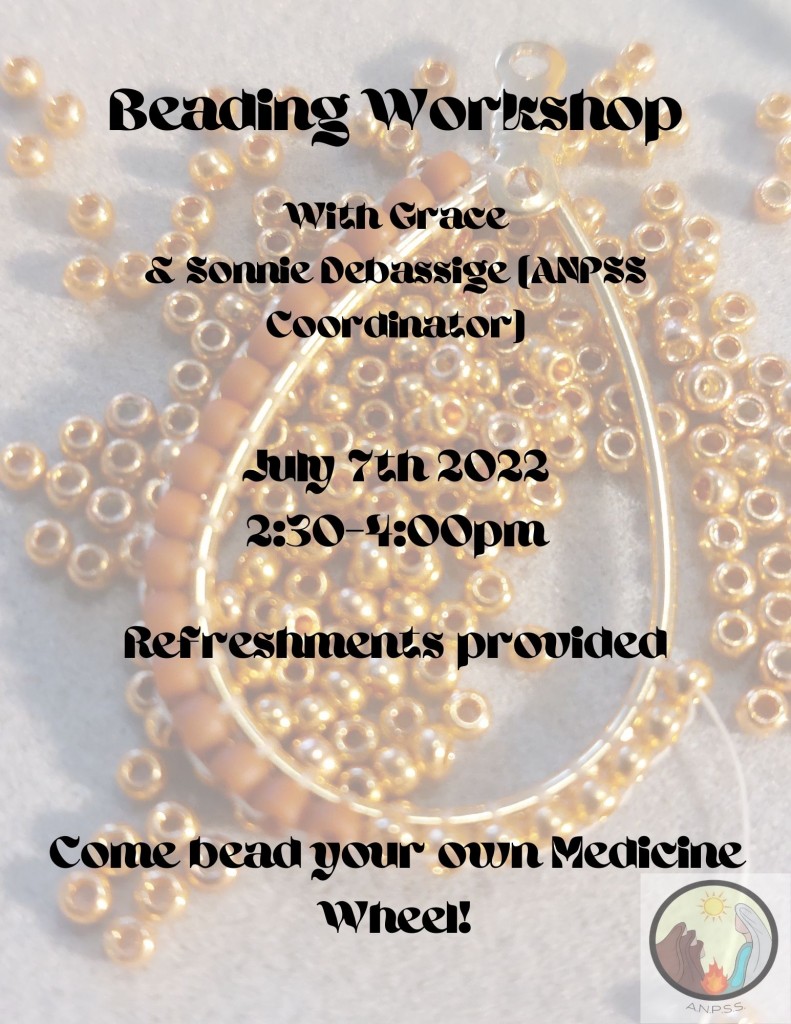 This year the Annual General Assembly will be in person – please note the new dates below: 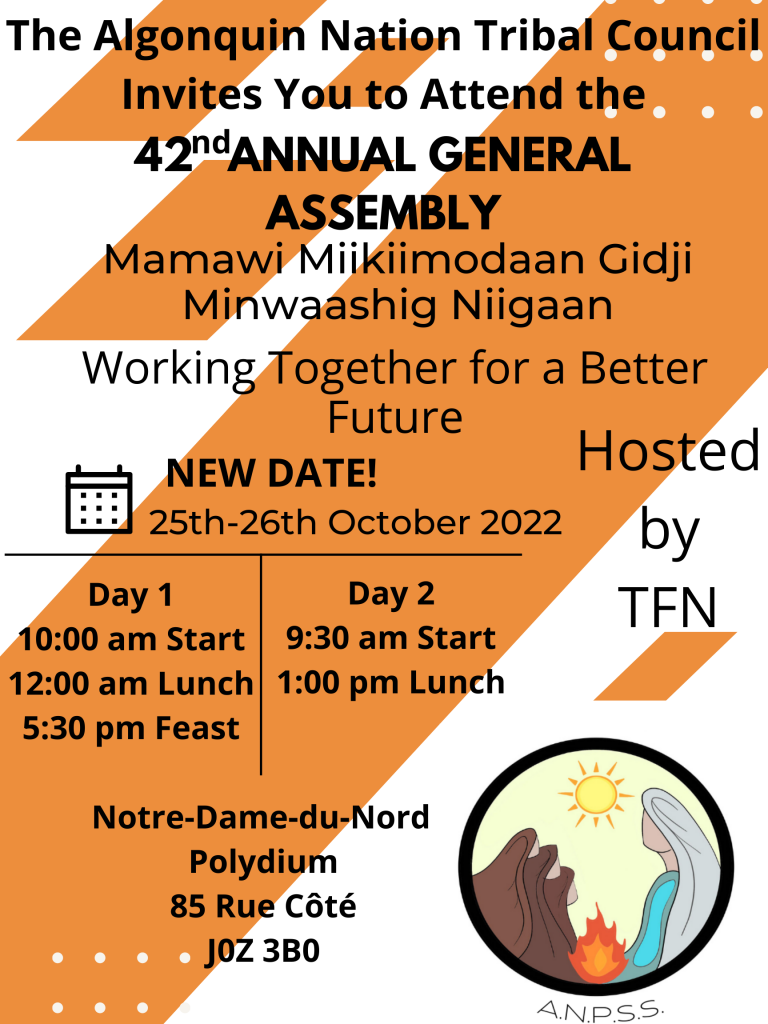